December 2020 Core Update: Here’s What You Need To Know

*This post contains affiliate links to our partner sites. SimplySearch earns a small commission from any sales generated by these links at no additional cost to you.

The December 2020 Core Update is now rolling out live. As is typical with these updates, it will typically take about one to two weeks to fully roll out.

Google has officially announced its December 2020 core update. It typically takes 1-2 weeks for them to fully roll out this update but it’s possible some users may already be experiencing the effects of this update. It’s also likely that a vast majority of sites may not even notice any changes provided that they’ve been paying attention to Google’s recommendations over the past 12 months.

Google hasn’t rolled out a core update since May 4, 2020, this year. While John Mueller did explicitly let the community know that core updates cannot be delayed as they aren’t on a fixed schedule, it seems this was the case due to the Coronavirus Pandemic that we are all familiar with.

Typically they’ll roll out an update every 3-4 months, this time it’s been 7 months since their last update. While his tweet is from April, and we did see another core update in May, it’s clear something delayed the rollout of the most recent update.

It’s possible that we will see larger than normal effects from this update as it could potentially be a combination of what would have been an August 2020 Core Update in addition to further updates in the past 3 months.

How Can You Prepare For The December 2020 Core Update?

Well, it’s already too late to “prepare” for it, but there are some steps you can take to monitor changes and quickly identify if you’ve been affected. If you follow the next few steps, you’ll be able to track and quickly identify any effects the December 2020 core update may have on your website.

Track Keyword Ranks for Indications of the December 2020 Core Update

First and foremost, track your rankings! If you don’t already utilize a tool to do so, check out SEMrush. They have a free 7 day trial period for new users.

You’ll be able to upload your target keywords as well as run a check on all current keyword ranks through their tool. Once you’ve done this, watch for any major gains or losses in rankings for specific keywords.

If you notice anything abnormal, you could be looking at an effect from the core update. Take a look at the affected page and try to identify why it was affected. It could be content-based, backlink-based, user experience based or many other factors.

Right now we just don’t know enough about the update to specifically isolate expected effects but I believe we can make an educated guess that it will be primarily related to the mobile user experience of your website.

Google has been recommending for people to optimize their mobile experience for a year now and back in October, SEJ reported that John Mueller confirmed March 2021 will be the date of the mobile-first index shift.

Desktop sites will be dropped so any content only visible on a desktop version and not mobile will no longer be indexed by Google.

The second thing to look for is your Search Console performance.

Keep an eye out for your average position movements each day as this will indicate any major changes to your traffic. If there are any changes, you’ll see them here and be able to isolate the pages, search queries, and also identify any crawl errors on your site.

The third area you’ll want to inspect is your organic search traffic report from Google. You’ll be able to track organic traffic in here too but in more detail than what is provided in the search console with regard to the individual pages.

If you’ve noticed a ranking drop that could potentially be user experience related, you’ll want to take a look at metrics such as the average time spent on your website and which pages users land on the most.

You can use the content report to see how individual pages are performing and also filter this data further by selecting specific segments to better understand how your audience navigates your site based on their medium. 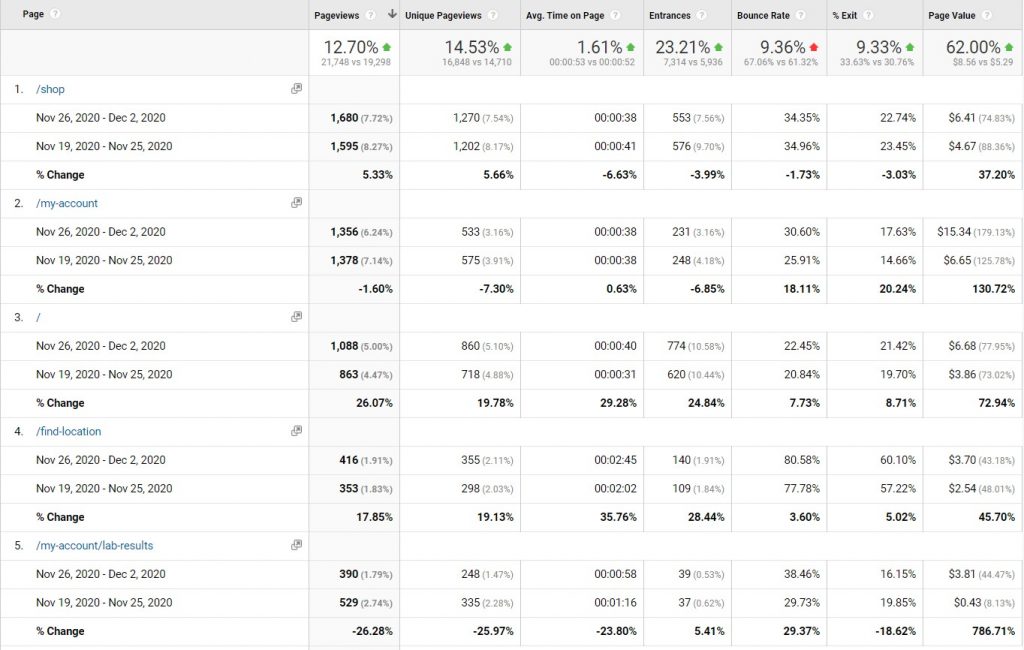 The above screenshot shows performance based on all traffic. Now let’s look at the same pages, but specifically just from Organic Search: 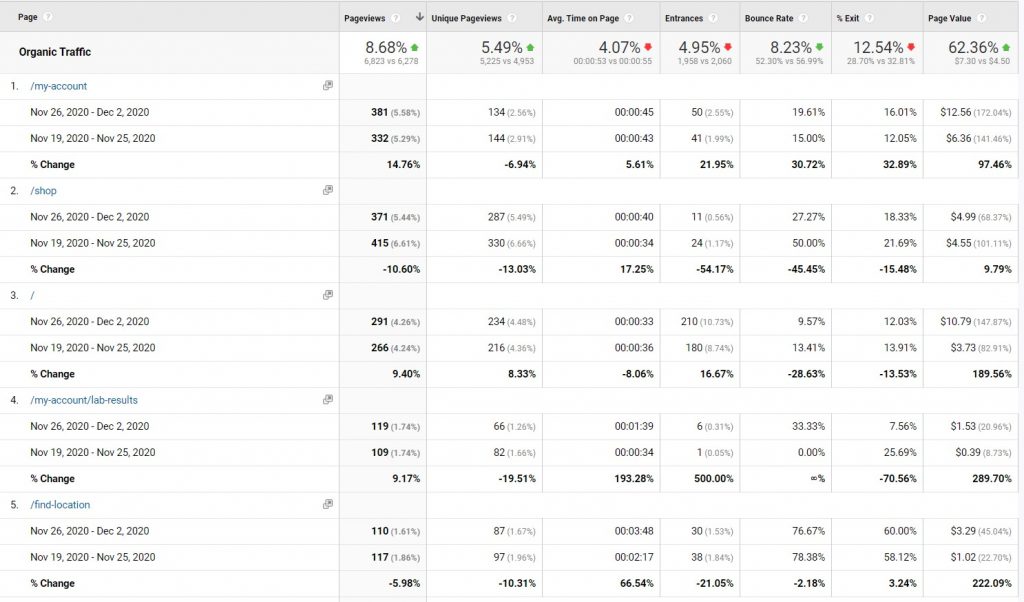 The pages above are, with the exception of the homepage, account-related pages in this instance. Looking through these metrics, we can see clear increases on these pages with the average time spent on the site. Users are spending more time interacting with their accounts on this site but even when we look at the find a location page we see this same trend.

Overall the site is down with time spent though so we know we need to focus more on providing a richer experience for visitors on the site. Pageviews are up across the site by about 8.7% so more people are finding the site from organic search than before. The main thing to note here is that the site has had stable growth in key areas over the past 12 months.

If we continue to monitor this trend and we see a sharp decline or incline in traffic, we’ll know it’s likely related to the December 2020 core update.

Lastly, you should keep an eye on the Mozcast for indications on how the December 2020 Core Update is affecting sites. It’s a fantastic tool that allows anyone to view data provided by Moz on what they perceive as “Algorithm turbulence” that tends to correlate with Google algorithm core updates. 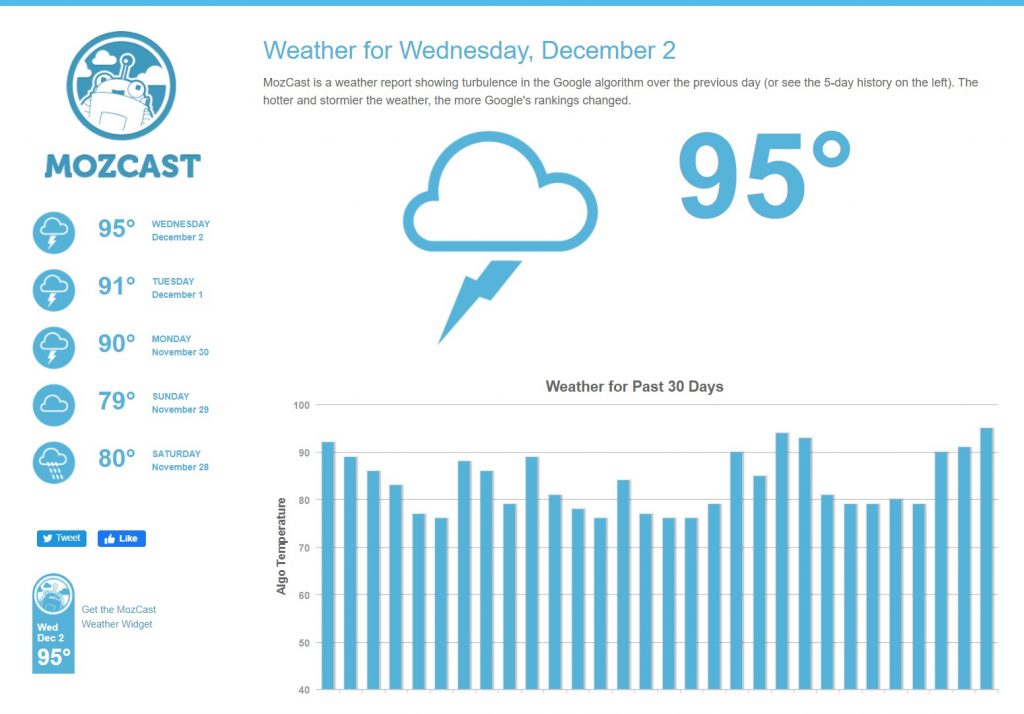 You can see that despite the December 2020 Core Update supposedly rolling out today, we see spikes all through the past 30 days that indicate they’ve been testing various aspects of this algorithm update. If you’ve been watching this area closely, you’ll have had an idea that an update was on the horizon.

I recommend every business owner who is serious about their SEO to bookmark the Mozcast page and check it frequently. You can even add it to your own dashboard using the following code.

Effects of the December 2020 Core Update

We’ll be updating this section over the next few days and weeks as we learn more about the core update and how our audience and clients can navigate through the updates. It’s still too early to tell exactly what this update is doing but we’ll be keeping a close eye on it for you.

5 Essential Tips for Your Next Email Marketing Campaign →